What Is The Aguri Speedshield Speed Trap Database?

Recent figures reveal that motorists in the UK are being fined every 2.5 seconds on average with one lucrative stretch of road claiming 500 motorists a month. That’s one in three motorists receiving a fine every year. An Aguri speed trap detector can help you stay within the law and avoid penalty points and speeding fines.

The Speedshield database is preinstalled on all Aguri products so you can use them straight out of the box without the need to register and update them first. We don’t charge for updates and there are no subscription fees, just no more speeding tickets…

British motorist’s paid over £30 million in speeding fines over the last 12 months, so we know that you will be relying on us to help you keep a clean licence. The Speedshield database currently includes over 50,000 locations across Europe, the most comprehensive around and it’s free for all Aguri customers.

No subscription charges and No download fees – just a Points Free licence.

What type of speed traps and speed cameras will my Aguri detect?

There are many different types of speed traps in use across the UK and Europe and it can be pretty confusing identifying what is a speed trap and what isn’t sometimes. The comprehensive Speedshield database currently includes the following speed traps but we’re always on the look out for anything new…

but many are now grey and smaller than the original camera. Many Gatso cameras are accompanied by a series of white lines painted on the road.

Gatso’s target the back of your car and calculate your speed by emitting a constant K-Band Radar signal. If your vehicle passes through the radar faster than the speed limit, your photograph is taken and a speeding ticket automatically issued.

A Gatso speed camera normally targets your vehicle from the rear as you pass it, taking a photograph of the back of your vehicle if you are exceeding the speed limit.

Recently many stretches of motorway in the UK have been upgraded to what are being called ‘Smart’ motorways. The speed limit on these sections of motorway varies depending on traffic flow and congestion. The current applicable speed limit will be displayed on overhead gantry signs and often policed by speed cameras called HADECS3. All Smart motorway cameras and HADECS3 speed trap cameras are included in the Speedshield database. 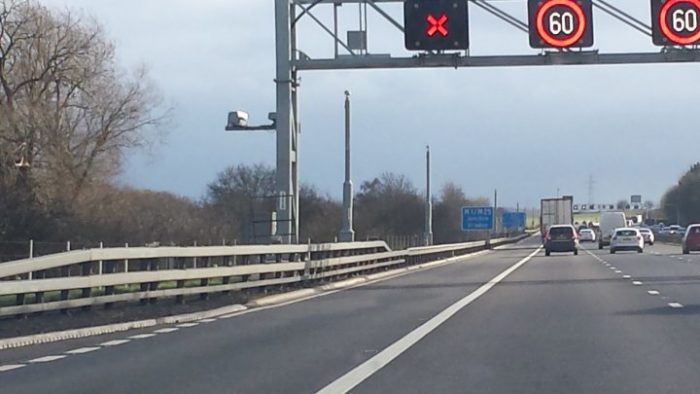 HADECS3 are normally mounted on a motorway gantry and is a variant of REDFLEXspeed-radar. It is used by the UK Highways Agency for their Digital Enforcement Compliance System ‘Smart’ motorway to support the implementation of mandatory and variable speed limits on selected motorways. Small cameras are mounted to the side of the road and automatically adjust to the variable speed limit imposed on the motorway designed to keep traffic flowing during busy periods.

REDFLEXhadecs3 uses non-intrusive dual radar for the detection of speeding vehicles in all weather conditions, with lane identification, vehicle position and positive vehicle identification. HADECS is designed to monitor receding traffic only, so will monitor the rear of your vehicle as you travel by. Unlike some other motorway speed cameras, this system can monitor up to five lanes of traffic including the hard shoulder if necessary.

This system is completely automated and any ‘speed violation’ data is sent from the camera system via a data network to an evidence receiving and control unit (ERCU) in a remote and secure office, where the offence viewing and decision system (OVDS) decrypts and then processes the violations for prosecution and when required creates a court file for a court viewer stand-alone utility (SAU) to display, print and export the evidence as an electronic file if required by the court.

Dual radar technology eliminates the usual radar anomalies and allows the system to be operated at sites where traditional radar-based camera systems fail, while the two radars operate independently to verify speed measurement. 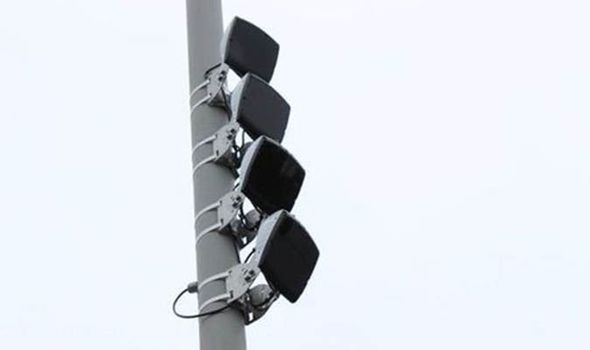 Yellow Vulture super speed cameras can fine motorists for a number of different offences. The cameras have now been launched at a number of locations across the UK in an attempt to improve road safety. They differ from traditional speeding cameras as they work in pairs and can spot motorists not only speeding but also other offences such as using a  mobile phone while driving and even when a driver isn’t using a seat belt.

They are positioned to face oncoming traffic and are paired with an LED box system 20 yards before them. Multiple cameras are set up at separate locations, around 200m apart, along the road which will help determine an average speed between them to determine whether or not your vehicle has exceeded the limit.

They are said to be as effective in the night as they are in the day and will run 24 hours a day.

Mobile camera vans or ‘Safety Partnership camera vans’ can be operated from many different locations and moved easily from place to place, as and when needed. 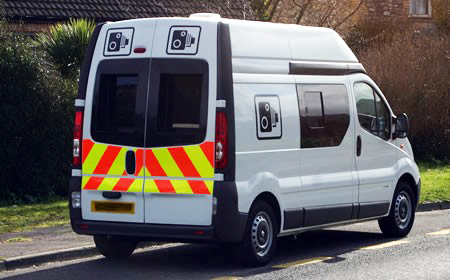 However there are many sites where these types of speed traps are regularly and frequently used and these locations are stored in the Speedshield database as ‘Mobile speed trap locations’ or ‘High Risk zones’. These locations can be detected by any Aguri system that incorporates GPS. Police camera vans can be used to target your vehicle from the front or the rear.

Mobile laser guns are the most difficult speed traps to detect. They can be hand-held or mounted on a tripod and can be easily moved from one location to another. Police laser guns emit only a very narrow beam, so only a highly sensitive laser detector such as Aguri Skyway has a chance of detecting them. 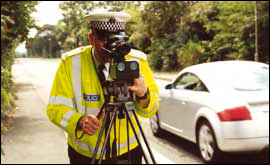 We do find however, that even though laser guns be used pretty much anywhere, they are generally used at a number of ‘favourite’ spots. These ‘favourite’ locations are stored in the Speedshield database as ‘Mobile speed trap locations’, so even if Skyway is the only device with the genuine ability to detect a laser gun, all our GPS based systems such as the Aguri DX1000 can provide alerts to our database of ‘Mobile speed trap locations. Police laser guns can be used to target your vehicle from the front or the rear. 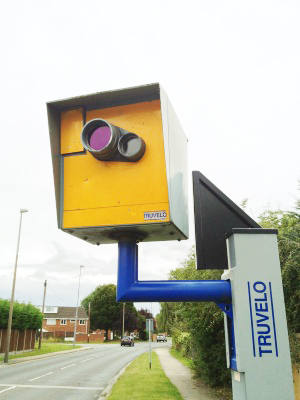 The Truvelo speed cameras may look similar to the a Gatso speed camera but actually operate in a very different way. Truvelo doesn’t use radar or laser to determine your vehicle’s speed, instead your speed is calculated by measuring the time it takes your vehicle to travel between two sets of piezo strips buried in the road surface.

If the speed trap determines that you are travelling above the posted speed limit, a picture of your vehicle is taken and a speed ticket automatically generated. As no radar or laser is emitted only speed trap detector incorporating GPS technology can detect it.

A Truvelo speed trap normally targets your vehicle as you approach it, taking a photograph of the front of your vehicle if you are exceeding the speed limit. 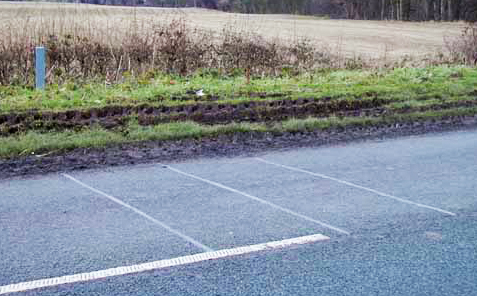 DS2, Speedmaster and Autovision are all very similar systems and are a semi-permanent speed trap

that usually incorporates 3 strips in the surface of the road, accompanied by a short grey post that can be seen at the side of the road. These sites are harmless unless connected to additional equipment which is usually found in a camera partnership van or unmarked car.

Speed Curb speed cameras are less common than Gatso cameras, but there are still plenty about.  They are also known as “Monitron” or “Tri-eye” speed traps. Speed Curb is connected to two strips in the road surface and calculates your speed by timing how quickly you travel between the two strips. Speed Curb does not transmit radar or laser so you need a speed trap detection system that incorporates GPS technology to detect them. 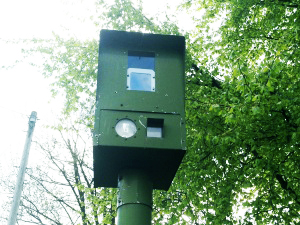 Watchman works in a similar way to a Gatso speed camera. A continuous stream of radar is emitted and your vehicle’s speed is calculated as it passes through it, triggering the camera and a speed ticket if you are exceeding the speed limit. However, the difference with this speed camera is that it can monitor

your vehicle’s speed before you pass it. Watchman has two types of camera built in to it. The first is used to take an overview of the road and the other is used as a Number Plate Recognition System. Watchman speed cameras often accompanied by a “speed board” which displays the speed limit for that stretch of road.

A Watchman speed trap normally targets your vehicle as you approach it, taking a photograph of the front of your vehicle if you are exceeding the speed limit.

Peek speed cameras work by timing how fast it takes your vehicle to travel across three piezo strips buried just below the surface of the road. If you are exceeding the posted speed limit, the system 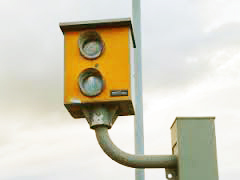 photographs your vehicle and automatically issues a speeding ticket. Peek speed cameras are often accompanied by visible white lines on the road.

Peek speed cameras normally target your vehicle as you approach it, taking a photograph of the front of your vehicle if you are exceeding the speed limit. They can also be used to monitor vehicles ‘jumping’ red lights at the same time.

A new set of speeding cameras have launched in the UK which are dubbed as ‘speed on green’ cameras. These new cameras track a drivers speed at traffic lights and are currently being trialled in Britain. They will keep an eye on when a driver jumps a red light and also record the speed of vehicles travelling through the junction, to see if the limit is being exceeded.

What is the best selling Aguri speed trap detector?

How often should I update the speed trap database on my Aguri speed trap detector or sat nav?

All Aguri speed trap detectors and sat navs are shipped with the latest speed trap database pre-installed. To get the very best out of your device and if you are a high mileage driver we recommend that you update it once a week. If you drive fewer miles and less frequently we recommend that you update the database about once a month or before a particularly long journey. If you need more information or advice on how to update your Aguri, please visit the FAQ section by clicking here. 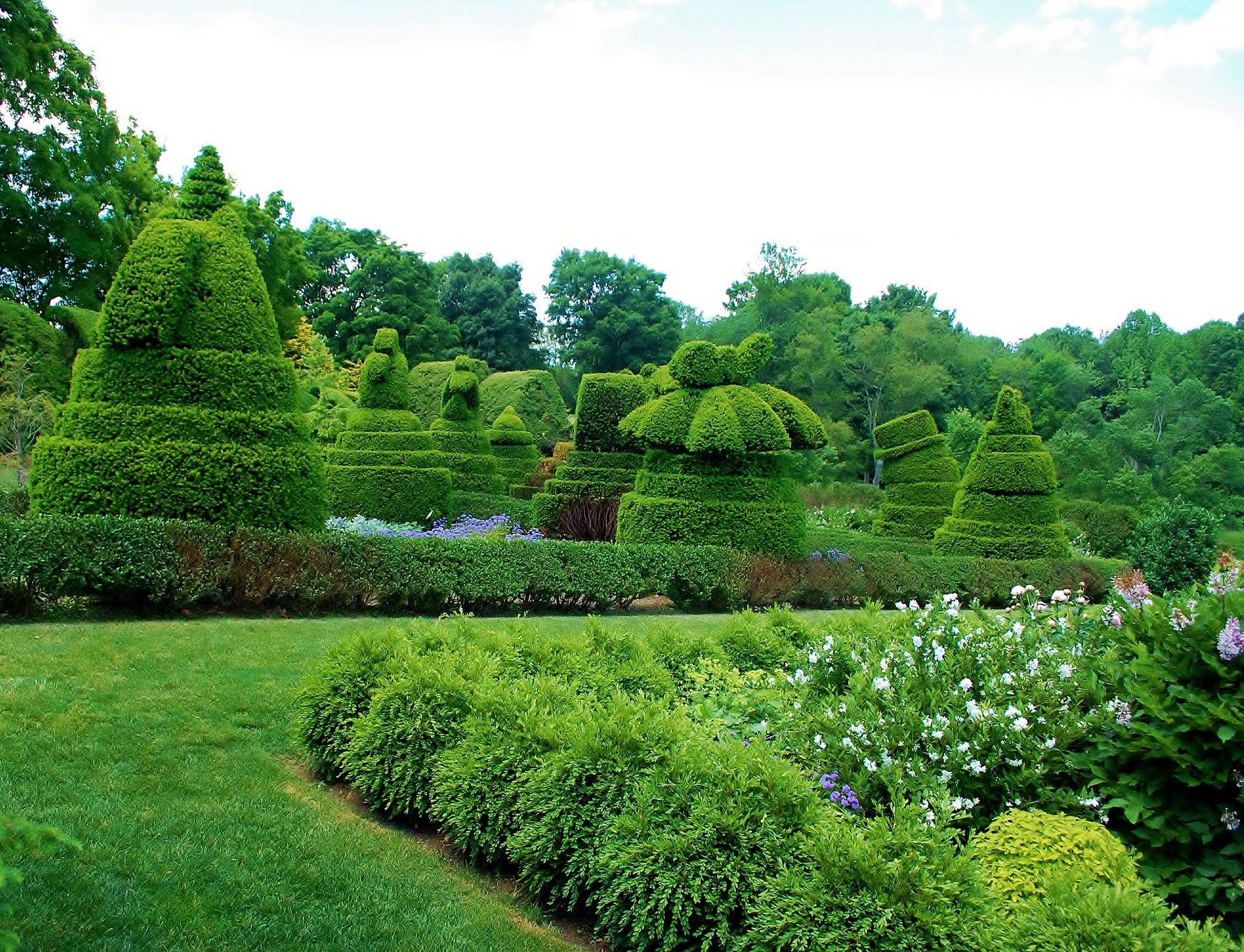 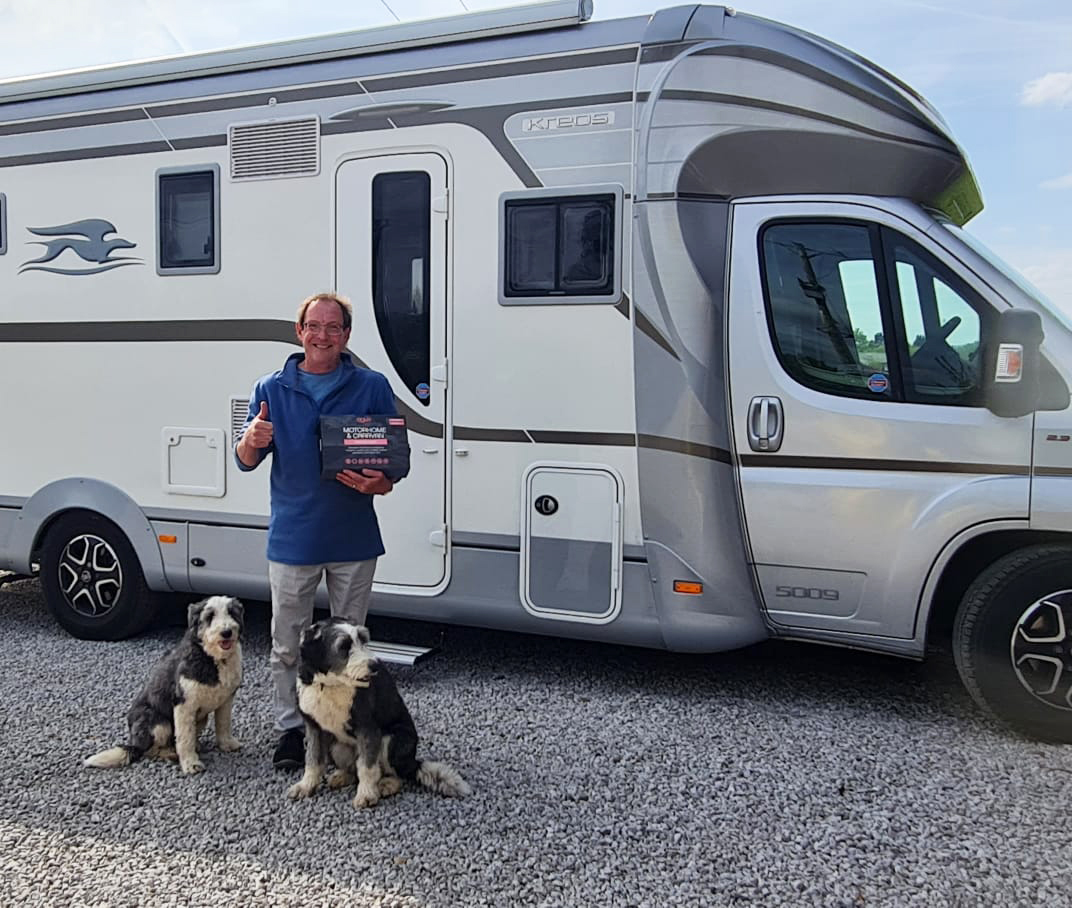 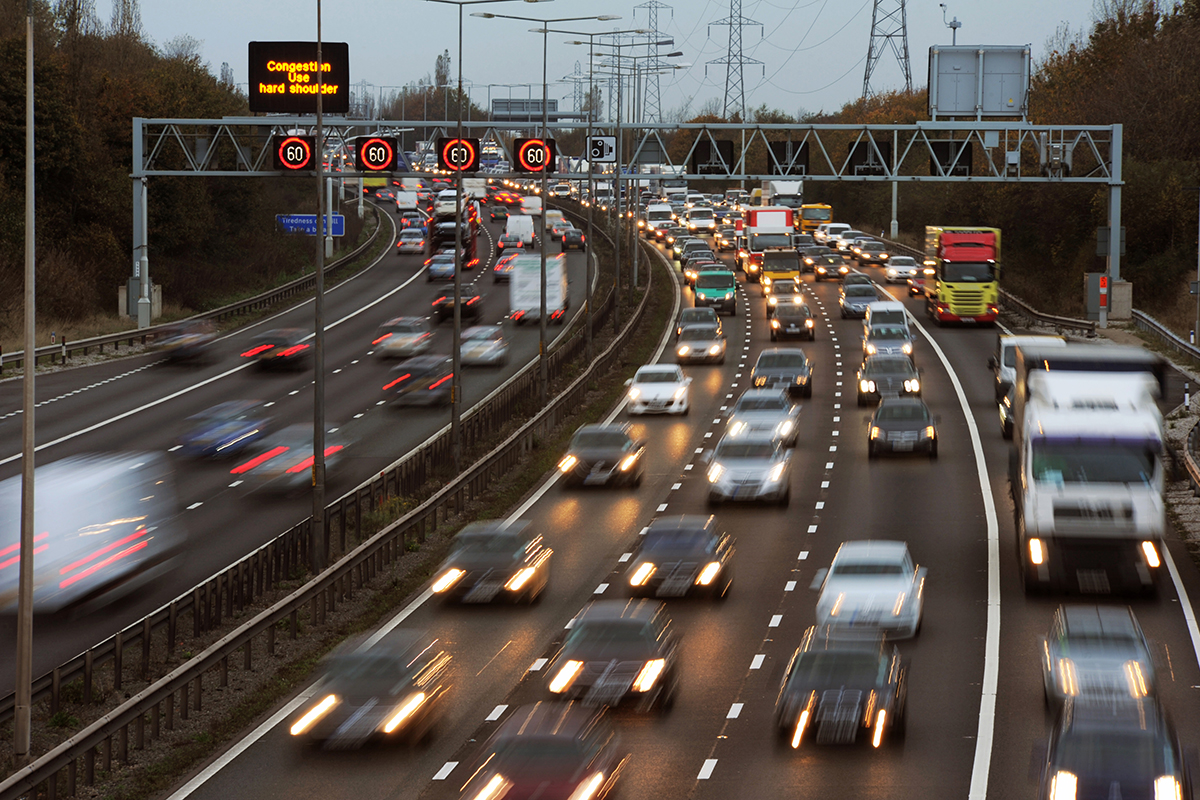